The brain tissue of the domestic pig (Sus scrofa domesticus) has a highly similar multi-gyral structure to that of the human brain and is therefore of great research value. However, its cellular compositions and heterogeneity have never been systematically studied.

Recently, the research paper "Single-cell atlas of domestic pig cerebral cortex and hypothalamus" by the team of Associate Researcher Chen Dongsheng from BGI-Shenzhen, Associate Researcher Chen Fang from MGI, and Professor Cao Gang from Huazhong Agricultural University was selected as the cover of Issue 14 of Science Bulletin (IF=1178). The first co-author of the paper, Jiacheng Zhu and Lihua Luo, are both master's students, supervised by Associate Researcher Dongsheng Chen, at the University of Chinese Academy of Sciences. (For more information about the publication, please see the introduction at the end of this article). 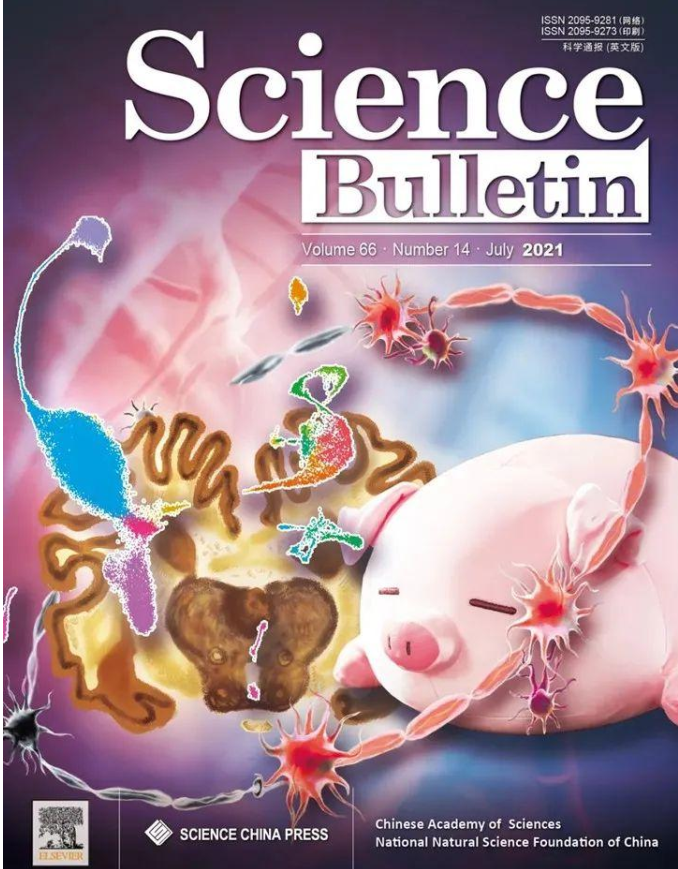 In this study, the single-nucleus transcriptomic profiles were constructed for the cerebral cortex (frontal lobe, parietal lobe, temporal lobe, and occipital lobe) and hypothalamus of domestic pigs, respectively, which not only explored the cellular composition and heterogeneity of brain tissue in the domestic pig, but also explored the interactions between cell types in different brain regions and the association of each cell type with neurological diseases, and revealed conserved or specific gene modules in pig and mouse brain tissue from evolutionary perspectives.

In addition, the team has built an open database of single cells from domestic pig brain tissue (http://120.79.46.200:82) to facilitate researchers' access and browsing of the data, which provides extensive resources for future research regarding neural science, evolutionary developmental biology, and regenerative medicine. 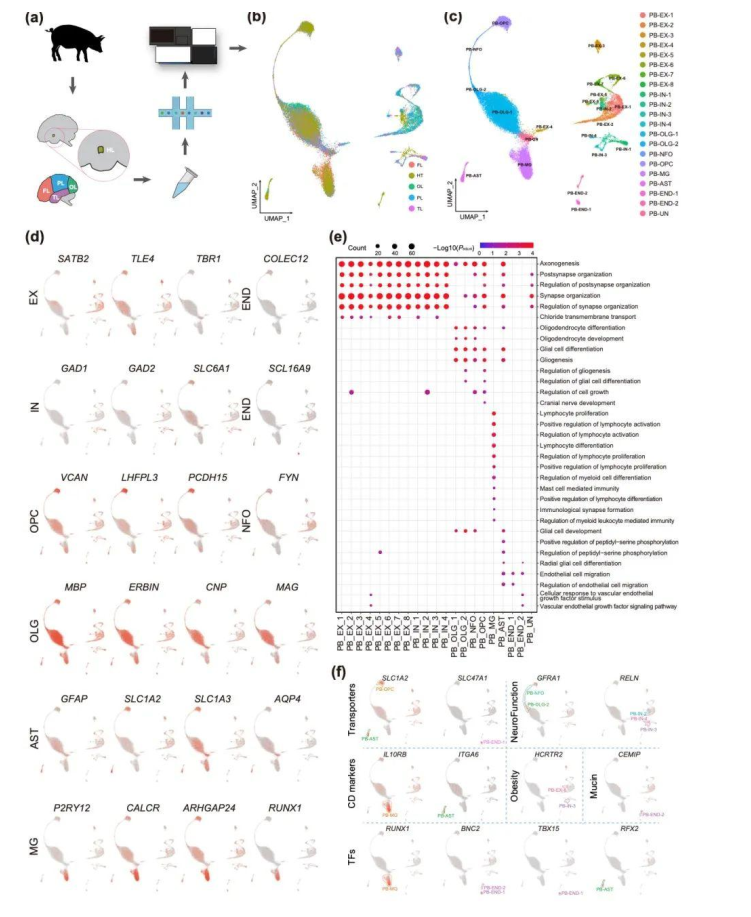 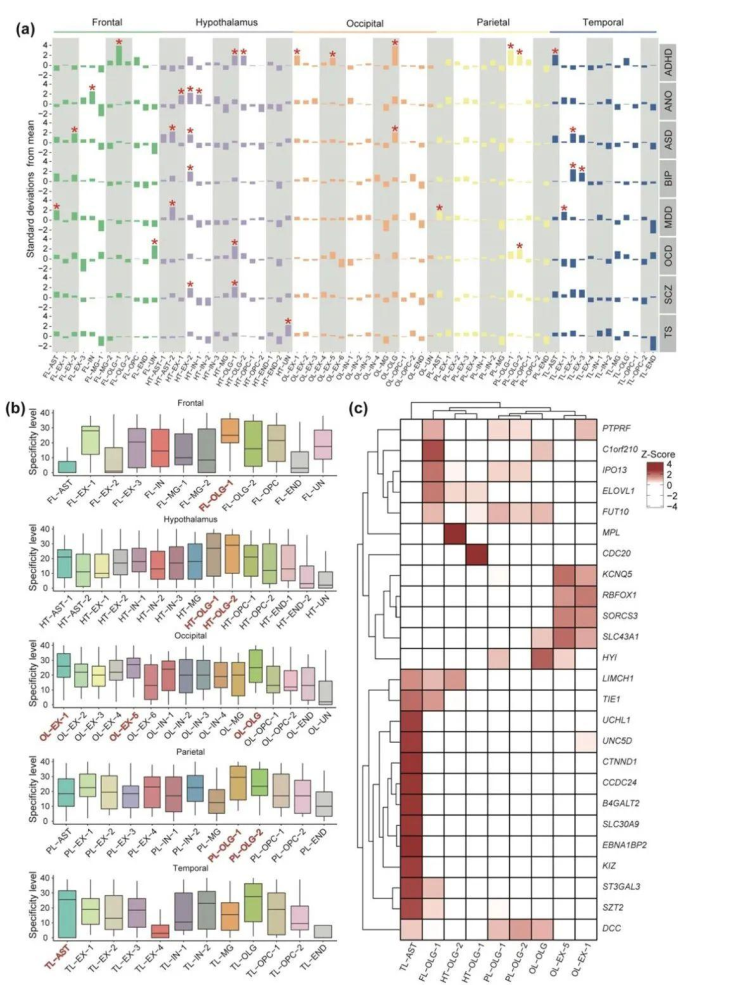 This study established a relationship between different cell types within the brain tissue of domestic pigs and eight neurological diseases by enrichment analysis of neurological disease risk genes. The risk genes associated with anorexia nervosa (ANO) and bipolar disorder (BIP) were only enriched in neuronal populations, whereas the other diseases were mainly linked with glial populations.

Through a more detailed analysis of the risk gene enrichment in attention deficit hyperactivity disorder (ADHD), this study identified risk genes with high specificity in different cellular populations that are enriched for ADHD risk genes. 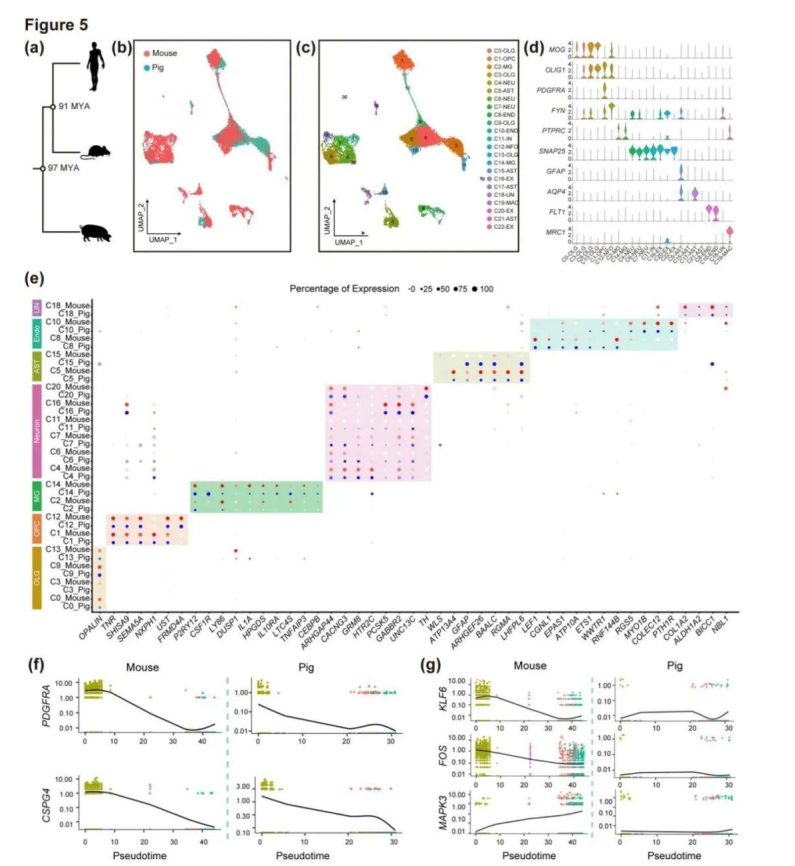 In addition, the study identified the conserved or specifically expressed gene modules from an evolutionary developmental perspective through a comparative analysis of hypothalamic tissue in domestic pigs and mice. 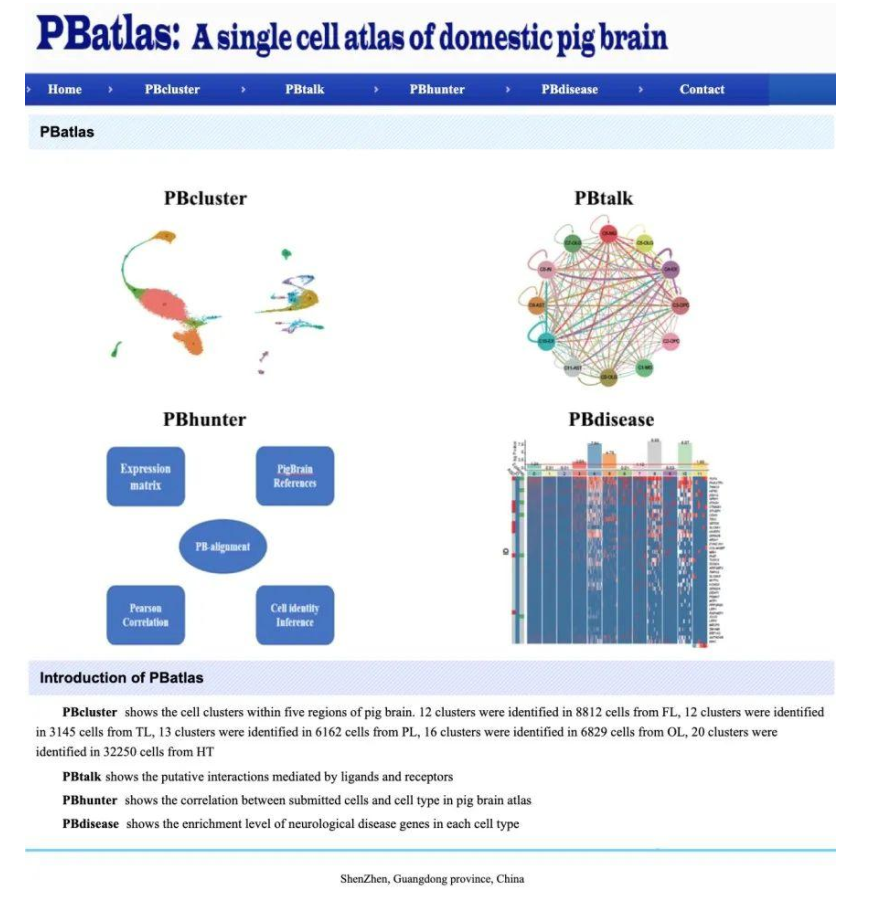 Finally, the single-cell transcriptome database platform for domestic pig brain tissue (http://120.79.46.200:82), built by the research team, provides an open, convenient, and fast interface for researchers to access, view, and utilize the data and results of this study.

All sequencing in this study was performed on the MGI DNBSEQ Platform Sequencer.

The author of the paper, Associate Researcher Chen Dongsheng of the BGI-Shenzhen, commented that "I am very honored to be one of the earliest users of the MGI sequencer, and I have personally experienced and witnessed the sudden progress of the sequencing performance and data quality of the MGI Genetic Sequencing Platform. We are very satisfied with the sequencing quality of DNBSEQ, and we have found additional advantages of DNBSEQ during our use: DNA nanosphere signal amplification has the inherent advantage that it uses the rolling loop linear amplification principle to avoid infinite amplification of errors compared to the traditional exponential amplification. The UWI sequencer uses DNA nanosphere microarray chips, which are arranged in regular, rather than in random, resulting in high chip utilization and cost advantages.” 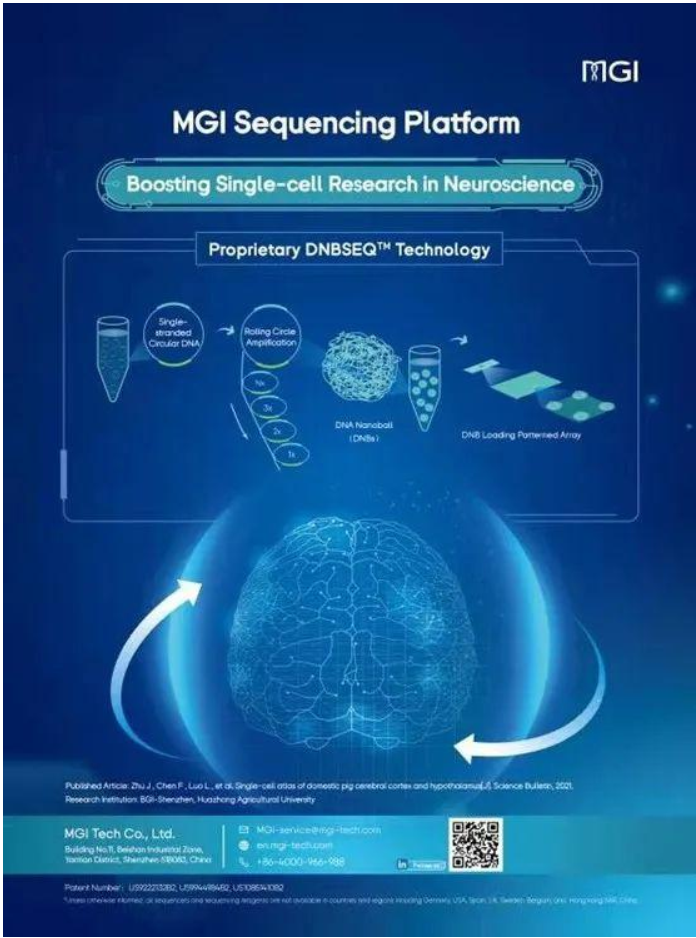 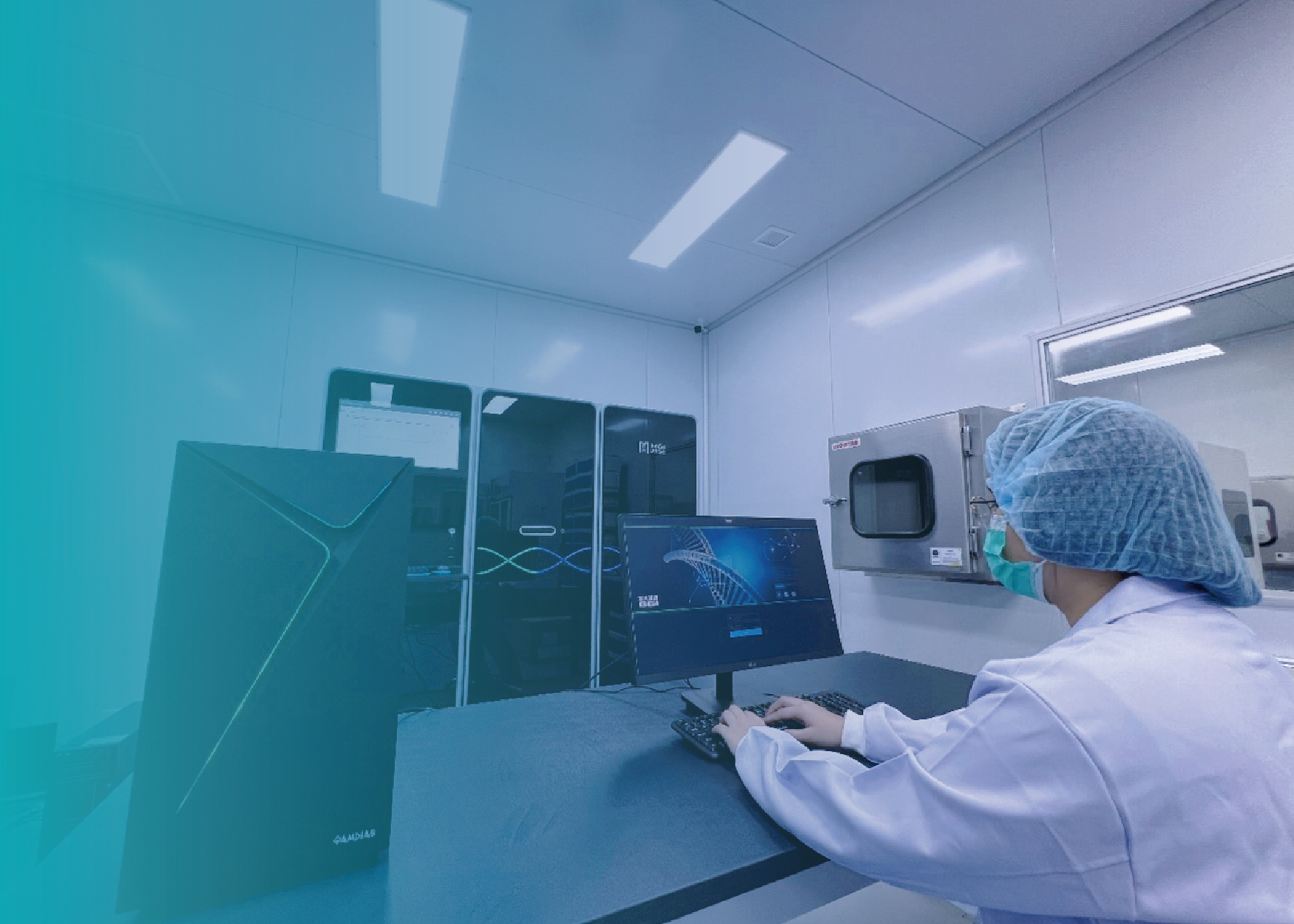 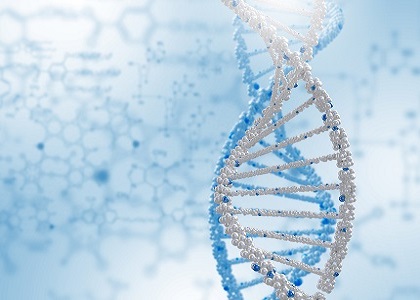