As part of the 16th International Conference on Genomics (ICG-16), MGI, a global life science leader and innovator, was hosting the Innovation Conference on Genomics from October 29 to 30, 2021, at which experts, scientists and researchers from well-renowned Chinese and international academic and research institutions shared their latest discoveries and breakthroughs on several cutting-edge topics, including the Omics for Earth, Omics for Agriculture as well as Omics for Stereo Life.

Based on its proprietary DNBSEQ™ technology, MGI is committed to empowering academic and scientific research institutions to overcome major scientific challenges and key technologies barriers to promote the development of life science industry.

2021 marks the 20th anniversary of the release of the Human Genome Project (HGP) and the first anniversary of the official launch of the Earth BioGenome Project (EBP). EBP is an international cooperative initiative that aims to sequence the genomes of all Earth's known species, including animals, plants, fungi and protists to eventually build a new foundation for preserving biodiversity and sustaining human societies. For this grand vision, BGI Group, a leading life science organization, has completed the sequencing of over 1,200 species based on MGI's proprietary DNBSEQ™ platform* and provided over 600 reference-quality genomes, while proposing a plan to provide technologies, tools and platforms for the research of EBP based on HAST, a haplotype assembly tool via trio binning.

During the featured session, Zhou Chuan'en, Professor from School of Life Sciences at Shandong University, pointed out that genetic improvement of alfalfa's compound leaves is an effective way to breed new alfalfa varieties with high efficiency, high quality, and high yield. "With the continuous release of high-quality reference genomes and extensive, large-scale re-sequencing and analysis of population genetics, researchers found that the reference genome from an individual organism cannot come close to covering all genetic sequences of all of Earth's species while creating a Pan-genome from multiple organisms can help address the incomplete population genetic variation map that was caused by the lack of a large number of sequences." Said Prof. Jiang Yu, Director of Center for Ruminant Genetics and Evolution, Northwest A&F University.

Agricultural genomics contributes to the industrialization of molecular breeding

Agriculture is a fundamental industry while seeds are the "chips" of the industry. In the field of agriculture, high-throughput sequencing-based research on plant and animal genomics mainly involves genome assembly, whole genome resequencing, transcriptome sequencing and single-cell sequencing. The sequencing species include crops, vegetables, fruits, poultry, livestock, fish, animal disease models and insects. The current research mainly focuses on the development of genome mapping and gene mining as well as the industrialization of molecular breeding.

MGI's three sequencers with different throughputs DNBSEQ-G50*, DNBSEQ-G400* and DNBSEQ-T7*, can meet the needs of biotech firms, research universities and government institutions in detecting different agricultural species in the application of molecular breeding. Empowered by MGISP-960 High-throughput Automated Sample Preparation System, MGI sequencing platforms* will further reduce labor and time costs while improving the efficiency of molecular breeding in the process of industrialization.

Professors, scientists and researchers from well-known Chinese and international academic and research institutions participated in the featured session on agricultural genomics to showcase their fruitful scientific research and application achievements in animal husbandry, aquaculture and crops based on genomics-assisted molecular breeding technology.

The stereo-seq technology opens a new era of life sciences

In this featured session, Dr. Katherine Bull from University of Oxford shared how to adopt single nuclei RNA sequencing and SpaTial Enhanced REsolution Omics-sequencing (Stereo-seq) to illustrate the potential of spatial and single cell data to transform renal pathology research and applications. In addition, Prof. Rickard Sandberg, from the Karolinska Institutet (KI) in Sweden delivered a talk about "Scalable, cost-efficient plate-base scRNA-seq for improved single-cell analysis of tissues and cellular processes", covering the current developments of scRNA-seq to enable the generation of more accurate cell atlases and the use of these methods in constructing a comprehensive molecular and spatial atlas of human skin.

Mankind has been exploring the mystery of the earth, nature and life in search of the ultimate truth for thousands of years. Innovations in technologies, tools and platforms continue to drive the development in omics. As a life science tool provider, MGI will empower more users and promote the innovative development of industrial ecosystem based on its technical strengths and forward-looking industrial strategies.

*Unless otherwise informed, all sequencers and sequencing reagents are not available in Germany, USA, Spain, UK, Hong Kong, Sweden, Belgium, and Italy. 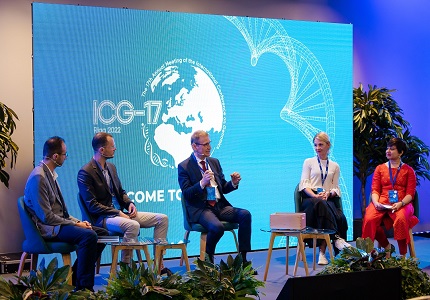